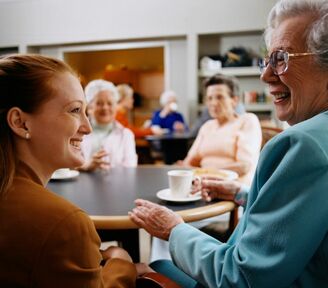 Dignity and Engagement projects support staff to talk in depth to people their service supports or, if people themselves would struggle, with relatives. The staff can do this in pairs, or a consultant can work alongside a member of staff. Either way, the process creates a safe and supportive space for people to express their views and to give detailed feedback.

We support the manager and the team to develop actions in response to what has been said, and to create a plan for future engagement with everyone who has been involved. It's a very adaptable methodology, which could be used in  a single service or across a group of services, and it's one that we believe has the potential to be transformative.

A previous project
We worked with a group of 8 staff from a care home for older people. After half a day’s training, they each spent half a day with a project consultant and talked in detail to two or three people. There were 19 questions, although  not everyone could or wanted to answer all of the questions. Two of the people were accompanied at their meeting by a relative.

People’s answers were summarised and fed back to the 8 staff, to the wider staff team, to residents and relatives. The manager and the team worked on actions in response to what people said and the team was supported to agree a series of statements about how they would aim to work in future. A series of new ways to encourage ongoing feedback was agreed.

What we found out
On the surface there was a good level of satisfaction with the home. But, when we went below the surface, there were lots of ways things could be better for the people we spoke to - often just needing small, practical changes that wouldn’t be difficult or expensive.  Ten people made practical suggestions about how their dignity could be improved and there were requests and suggestions about meals, music, bedrooms, routines, bedding, acoustics, choice of cutlery, and many other areas.

One member of staff said: “I couldn’t believe how much I learnt spending half a day with the project consultant just talking to people… it has changed the way I approach my work.”